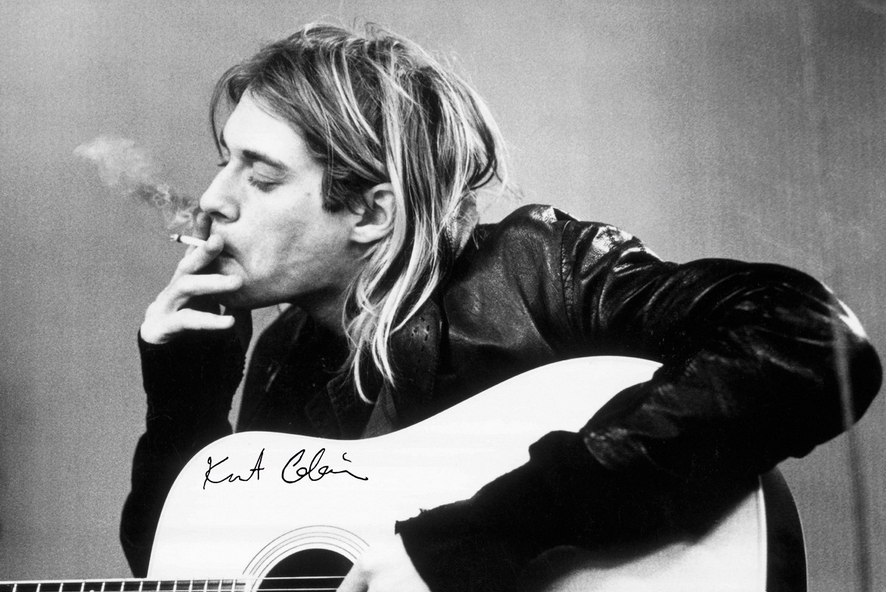 You are here: Home / Reflection / The Ghost of You

This might be too much for those of you who are pre-coffee because it’s borderline “dark”.  I’ll wait a second while you go fetch a cup. Or, I suppose, the drink of your choice. I’ll ignore the fact that it’s 10 AM.

I went into a Kurt Cobain and Nirvana spiral yesterday – the kind of spiral that gets hold of you when you least expect it from a memory or something you’ve heard. Nirvana was basically a staple of my teenage years. They supported my teen angst and “I hate everyone” attitude on the days where I felt like life wasn’t fair. But they were also there for the “hell yes” days in celebration of things that went right.

Nirvana was the anthem of my youth.

A few months ago I had the pleasure of going to Seattle for the first time (OMG ALL THE COFFEEEEE)  and one of the places I was most excited to go to was the EMP Museum because of the huge Nirvana exhibit they have.

Okay, okay…AND because you could use their sound booths to record vocals with auto tune and pretend to be T-pain. But I digress.

It was really strange and haunting to stand in front of an exhibit that had Kurt’s shirts that we’ve seen in countless pictures on a mannequin in front of me. It was almost like a ghost was standing there. Maybe it’s the embodiment of the reluctant rock star or hearing the introspective interviews, but you can’t help but feel pulled to the music and his “persona” if you were a fan. Even today.

Even in death, people leave behind such a strong presence that you can’t help but feel it.

Outside of being a kick ass My Chemical Romance song, “The Ghost of You” is a phrase that started dancing around in my head last night, so much so, that I had to put my fingers to the keyboard when I woke up this morning.

The ghost of you. It’s something we think about in passing every now and then when the darkness sets in; what legacy am I going to leave behind? Will people remember me? Will I be at the tips of everyone’s tongues or will I become a distant memory?

I don’t mean this in the literal sense of course – I mean this in the sense of a memory. It’s a hard and uncomfortable thing to think about, but my mind goes there when it’s left to itself and the world around me is silent.

Our lives are about touching others (the immature part of me just giggled) and having a lasting impact. It’s about showing up and making sure that we’re there when others need us the most. What do you want the essence of the “ghost of you” to be? Spend some time thinking about it. I’d love to hear what comes to you in the comments.

Now go find unicorns and rainbows to play with. That was some heavy shit.

I’ll leave you with this fantastical uni-rainbow-catterfly!